Gif to swf converter help you to convert the animated GIFs into popular Macromedia's (now Adobe) SWF file format. You can use the produced SWF files as banners for your web site. extract the individual frames out of the animated GIFs.

GIF to SWF Converter is currently best and wonderful gif to swf converting software. With this software, you can easily convert your photos, pictures (.gif) to . swf format to make your own Flash Slideshow on your website or your Myspace

Convert to BMP,TIFF,JPEG, PNG image series. Capture a frame to a bmp,jpeg,gif,tiff,png file Frame by frame: This mode runs Gif frame by frame, and is suitable for batch converting.

Gif To Swf Converter is an easy-to-use program that allows users to convert GIF images into Flash files. The program works, mostly, but it doesn't have a lot of features, and it isn't entirely clear about the ones it does have.

Gif To Swf Converter's interface is fairly plain, with buttons for selecting one or more images or directories of images for conversion. We like the program's preview pane, which displays each animated GIF before conversion, if you want it to. Gif To Swf Converter is quite simple to use: You specify whether you want to resize the image or images, change the frame rate if needed, and click then "Convert." The program quickly converts the images to SWF files and stores them in your chosen destination folder. This seems to be the extent of Gif To Swf Converter's bag of tricks; although the software's built-in Help file mentions that it's possible to capture a frame from an animated GIF and save it in another format, neither the interface nor the Help make it clear how to do this. We tried to figure it out on our own, but unfortunately we crashed the program in the process. 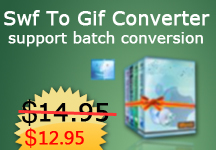 Click here to get technical support quickly if any technical problems with our products.

Any other questions, send email to our Order Support Team:
sales@789soft.com